How do we design a not short-circuit-proof 18VA - low profile safety transformer as per IEC 61558, protected by a miniature fuse in accordnce with IEC 127?

Technical specification relevant only to design

The procedure for testing is prescribed as per paragraphs 14.2 and 15.3.3:

In these output ranges, the bobbins, the case and the potting compound are employed exclusively together with insulation categories E and B. Wire insulation and insulation foils are very often employed in insulation class F.

Important note: the program will design the mean case temperature!

Normally, the transformer is operated in an environment whose temperature is between 25°C and 80°C. Very often, we encounter an ambient temperature of 40 degrees C and 70 degrees C.

In this case, the ambient temperature is stated as 70 degrees C.

For safety reasons, low-profile-constructed safety transformers are almost exclusively potted in vacuum in a case. The main advantages of a potted transformer are:

Let’s design a transformer potted in a case.

Thermal resistance of the potting compound

We have chosen a potting compound whose thermal conductivity is 0.4W/°K.

In this output range, recourse is had almost exclusively to a double-chamber bobbin. From the viewpoint of design, only the dimensions of the bobbin are important. A bobbin with increased insulation or large leakage paths has a smaller winding space and a smaller cooling surface area.

We have selected a double-chamber bobbin from a family of bobbins with a large winding space.

In this topic there is the possibility of potting just the bobbin or the window of the core, or of injection under pressure. In this method, we save a quantity of potting compound for the same voltage resistance in the potted transformer, and we don't need a case.

Our transformer is potted in a case in vacuum.

A flat transformer must be as flat and as small as possible. For that reason, these transformers are manufactured exclusively in UI sheet form and annealed, grain - oriented core quality with specific Fe-losses of 1.11 W/k at 1.5T and 50Hz (WV111, M6X,…).

These transformers are manufactured with an induction in nominal operation of between 1.5T and 1.7T (!). No-load induction is normally above 1.8T. For that reason, we must use an annealed, grain-oriented core quality without holes in the corners.

The output voltage of a not short-circuit proof transformer is tested in the hot state at nominal primary voltage and nominal load resistance.

We are going to perform our design at the nominal output voltage. 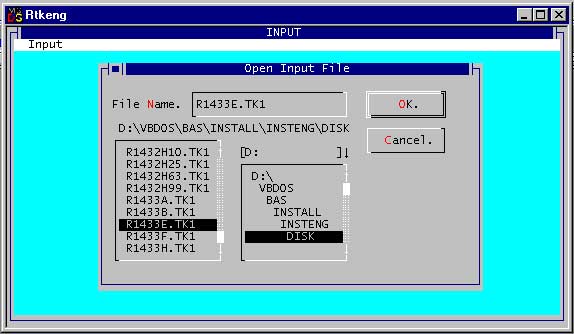 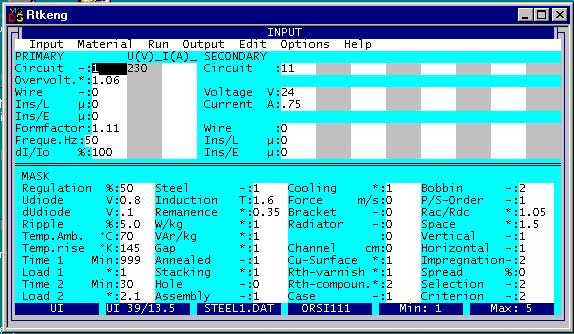 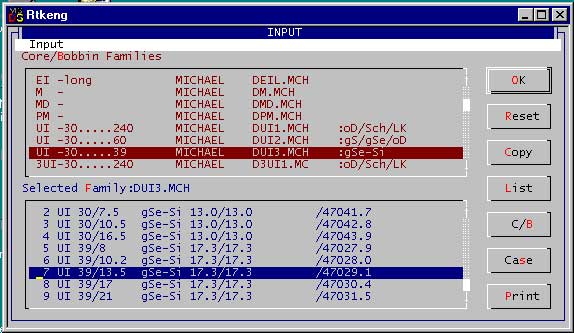 After the design procedure has been completed, the following design data is available and can be printed on 3 pages. 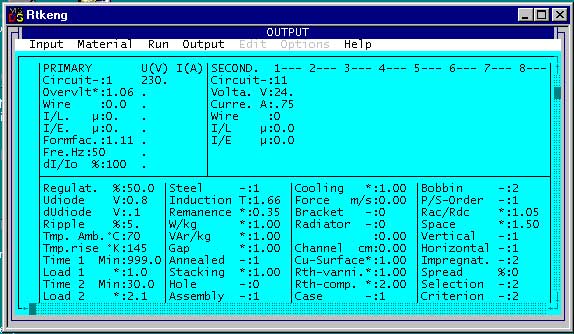 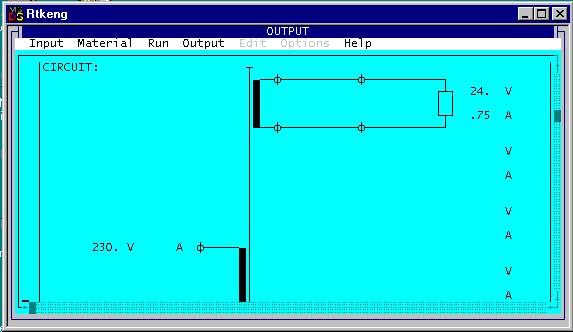 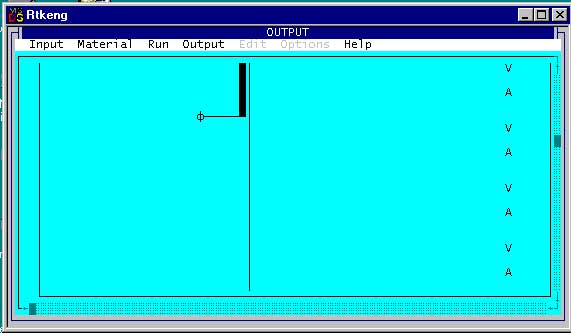 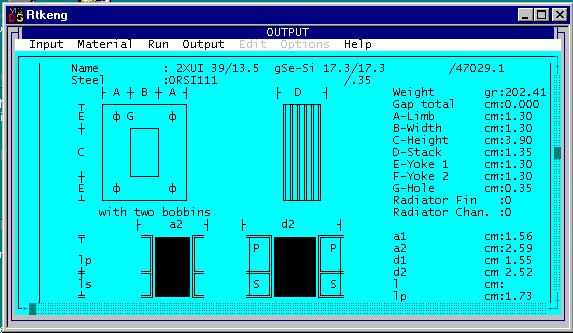 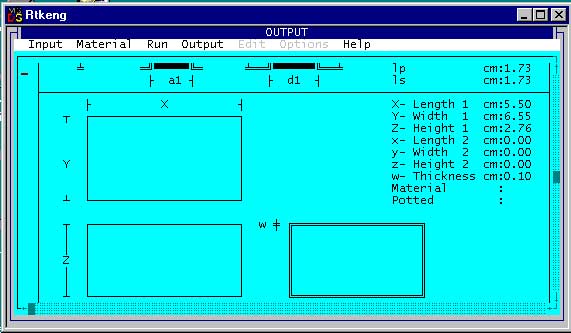 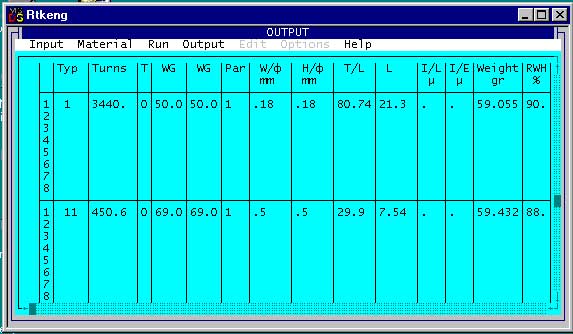 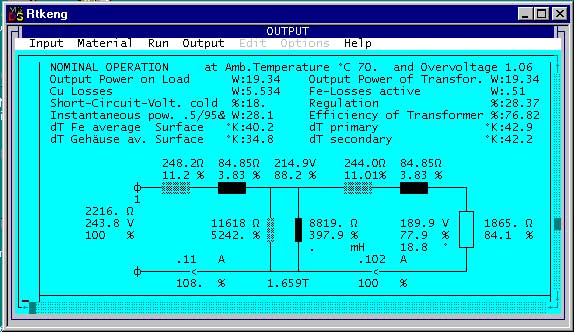 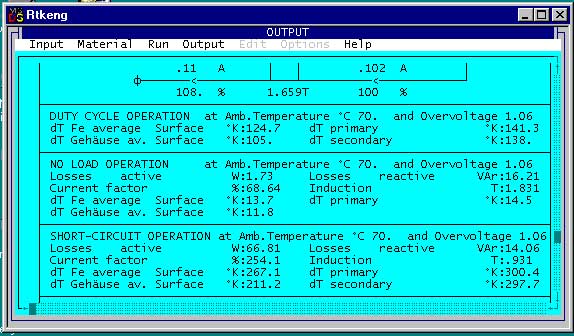 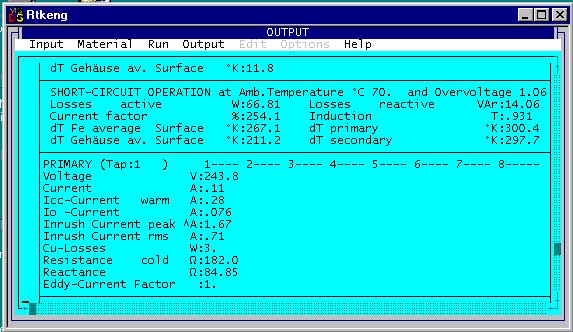 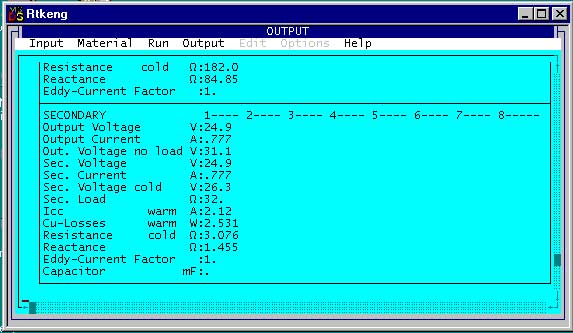 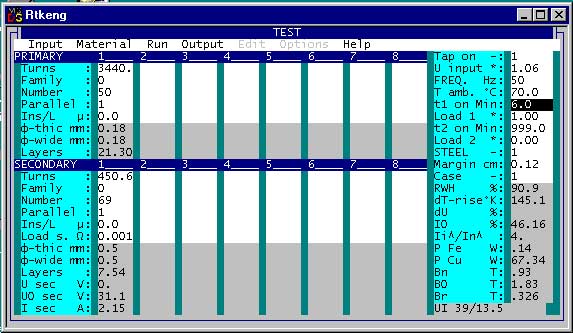 This means that from a very long (T2 in=999 minutes) no-load period (load2 = 0 ) we simulate a short-circuit (Load1=1 = short-circuit resistance) during period 1.
We now read the following:

After completion of the design work, we can print out the design data on-line or store it on the local PC and print it off-line. The output data file from this design example CAL0003E.TK2 is supplied together with this document. Copy it into the directory in which your Rale Demo Programm is installed.

Tips&Tricks The transformer is too full

This case frequently arises if you select your own core. Let us say that we wish to use this core for 40VA output, for example.

The transformer is relatively empty

This case frequently arises if you select your own core. Let us say that we wish to use this core for 10VA output, for example.

Manually change the wire thicknesses in the test program:

The no-load is not a criterion for design. The no-load temperature must not exceed the permitted limit.

The secondary nominal currents with a secondary-side located fuse are selected in the same way as the fuse nominal currents. In the event of a discrepancy, the K factor must be converted as follows:

In the case of a UI transformer, both the primary and the secondary are wound in two sections or on two legs. For that reason, we write the following information on the label of this transformer: